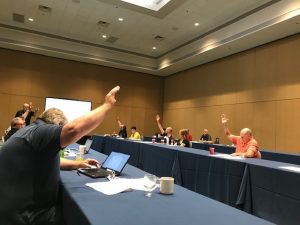 The AGRSS Standards Committee takes a vote at its meeting in Orlando June 10.

The AGSC Advanced Driver Assistance System (ADAS) Committee met first on Wednesday afternoon. The committee reviewed a series of checklists that had been created to help technicians use ADAS properly and to troubleshoot when items go wrong. The ADAS Committee also readied one checklist for possible incorporation in the AGRSS Standards.

“We want to make sure that AGSC members have the most accurate information, and the best tools available, to aid in proper calibrations,” said committee chair Jacques Navant.

The AGRSS Standards Committee tackled nomenclature first with a long and impassioned discussion of whether ADAS work should be known as “calibration” or “recalibration.” A final nod was given to the word “calibration.” A detailed review of possible additional Standard language concerning calibration followed. The language will be released for public review once members are polled in a final ballot.

The ROLAGS 2 Standards Committee, which had had a fledging initial meeting during Auto Glass Week 2019, became fully constituted at this one. Linda Rollinson was elected chair, operating procedures were put into place and new members were added. The Committee voted to adopt the current ROLAGS Standard and to begin work on ROLAGS 2 immediately.

In addition to ROLAGS 2 and the AGRSS Standards Committees, AGSC’s Education and Marketing Committees met, as did the AGSC board of directors and the NWRD’s executive committee.