The REHAU Group announced that it is setting up REHAU Automotive and REHAU Industries as separate companies within the Group, dividing the company currently known as REHAU AG + Co. Together with RAUMEDIC and Meraxis as well as the recently founded innovation unit REHAU New Ventures, the company said these will form the strong pillars of the REHAU Group in the future. At the same time, after more than 20 years at the helm of the REHAU Supervisory Board, Jobst Wagner will hand over the office of president to his brother Dr. Veit Wagner on July 1, 2021, and take on his brother’s current role as vice president. 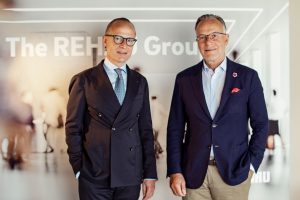 After more than 20 years at the helm of the REHAU Supervisory Board, Jobst Wagner (right) will hand over the office of president to his brother Dr. Veit Wagner on July 1, 2021, and take on his brother’s current role as vice president.

“Over the past over 20 years, my brother and I have steadily developed the REHAU Group and consistently set the course for a strong, globally active group of companies,” said Jobst Wagner. “At the core has always been our unmistakable culture, which has, from the very beginning, distinguished us as an independent family business that prioritizes innovation, entrepreneurial freedom and customer proximity. Above all, however, our focus is on our employees, with whom we are continuing this successful path.”

“As a modern family business, we rely on change to lead the Group into a sustainably successful future,” Dr. Veit Wagner said. “In particular, we want to make our divisions even more targeted and powerful. The Automotive Division and the other divisions differ significantly from each other in terms of business model, customer structure and internal organization. The previous automotive division will therefore become an independent company under the name REHAU Automotive. The new business unit will be given more autonomy to become more agile and competitive – with more room for maneuvers and decision-making, but still under the strong umbrella of the REHAU Group.”

“We are pleased that with Jürgen Otto we have been able to win over a proven expert and accomplished manager from the automotive industry to support the further expansion of our automotive business,” Dr. Veit Wagner said.

The transition to the new structure is expected to be completed in the first half of 2022. The new management bodies will already start their work on July 1, 2021. For the employees of REHAU, all employment contracts, contract contents as well as creditable seniority will remain unchanged.

This entry was posted in glassBYTEs Headlines and tagged The REHAU Group. Bookmark the permalink.