A Phoenix, Ariz., woman escaped impalement by a metal pole Thursday while driving on Arizona State Route 51 in Phoenix.

As reported by KPNX Action News on Monday, Mandy Poff was preparing to exit Route 51 about 11:53 a.m. on July 22, when a work truck in front of her hit a bump causing a 4-foot metal pole to fly off the truck’s trailer, bounce on the ground and fly straight into the windshield of Poff’s white Nissan SUV. 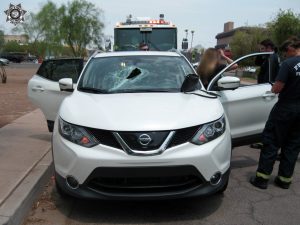 (Photo courtesy of the Arizona Department of Public Safety (AZDPS).

“Glass just showered down on me,” Poff said to KPNX. “My whole body felt like pins and needles.”

A driver travelling behind Poff stopped and called 911.

Poff told KPNX that paramedics could not believe she survived the incident.

The Arizona Department of Public Safety posted on its Facebook page Friday cautioning drivers to secure loads before driving on Arizona roads.

ADPS said on Facebook that the pole went through the center of Poff’s windshield, and was lodged between the center back seat and the roof of her Nissan SUV. 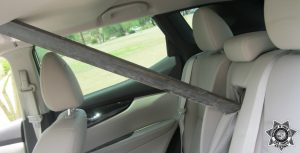 (Photo courtesy of the Arizona Department of Public Safety (AZDPS).

Poff did not suffer any injuries.

According to ADPS, the driver of the truck did not stop when the pole flew off the trailer, and the driver hasn’t been found.

This entry was posted in glassBYTEs Original Story and tagged Arizona, safety. Bookmark the permalink.