A young woman is the victim this time in the second book of the Detective Sasha Frank Mysteries.

“Cold Consequences” was released in late July and follows the death of a young woman who sustained an injury playing soccer in college. She buys pain medication on the street. “And something bad happens to her during the drug buy,” says long-time auto glass industry exec-turned-author David Rohfling. 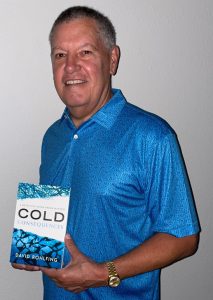 His second novel reveals the murderer’s identity within a few pages, so the book’s focus is on why the young woman was murdered and what happens thereafter.

“There’s no question that it’s a faster pace and a quicker read,” he says.

Rohlfing’s second book is set in 2013, and is a prequel to his first one, “Deliberate Duplicity,” which was set in 2018. A serial killer seeks revenge for something that happened in his past, but as he commits murders in Illinois, detectives are unable to decipher his intended message.

“He poses the people he kills with their eyes wide open sending a message to others,” Rohlfing says of his first book, released in early 2021. Rohlfing introduced readers to Frank, an average, every day kind of man, living in Bloomington, Ill., a small community, something Rohlfing can relate to. “More people are killed in my books than in the last year [where I live],” he quips.

According to Rohlfing, who is retired from the auto glass industry, but continues to consult and serve on industry-related boards, the murders in his books do not represent any crime that took place in reality. “These are all made up in my mind,” he says.

He started writing fiction after retirement, and is unsure how many books will end up in the Detective Sasha Frank Mysteries. “I’m going to keep writing as long as I enjoy it.”

He hopes to write at least one book per year, and is currently writing the third in the Detective Sasha Frank Mystery series.

“I would tell you my family and friends look at me very differently now. They don’t know where the darkness comes from,” Rohlfing says of his books.