This week started on a sad note for the AGRR industry. Just this morning brought the passing of long-time industry expert Frank Levesque.

Levesque, 72, retired in June 2015 after more than five decades in the industry, most recently serving as director of product development and technical services at Glass Doctor University. 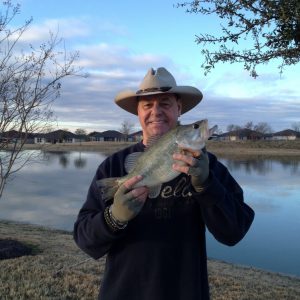 When Levesque retired in 2015, fishing was on the agenda. (Photo courtesy of Frank Levesque)

Tommy Patterson, director of technical services at Glass Doctor, says when he received the call Monday morning that Levesque had passed “I was devastated.”

“I can’t even begin to explain the void. I can’t put it into words,” Patterson says of losing his friend of 40 years.

Patterson and Levesque worked together in the 1980s at Portland Glass, in the early 2000s at Pilkington and most recently at Glass Doctor. “So Frank and I worked together quite a bit throughout our lives. Frank was one of my closest friends,” Patterson says.

So close that Patterson got married in Levesque’s living room.

Patterson says that Levesque called him a week ago. “He was looking forward to going home actually,” Patterson says. However, Levesque’s wife, Crystal, called Patterson Sunday morning to say her husband had taken “a turn for the worst.”

“[Frank] told me he hadn’t been that sick in his entire life,” Patterson says of the illness. Levesque was healthy before this illness, and “none of us expected this.”

“Probably the closest thing I’ve had to a brother my entire life. I will miss him greatly,” Patterson says.

In recognition of his retirement in 2015, Levesque spoke with glassBYTES and predicted a change coming in the auto glass industry.

He began in the industry at age 15 when his neighbor, a sales manager for a glass company, asked him why he didn’t get a job.

Levesque said he told the neighbor: “Why don’t you give me one?” He worked summers starting in 1964, and rode to work with his neighbor because he did not have a driver’s license yet. Levesque told glassBYTES.com in 2015 that he cleaned toilets, washed floors and learned the trade. Mobile work was far in the future. Windshields were installed about twice a day. Cardboard patterns were used to cut out windshields and sidelites.

He spent his career to devoted to training and safety.

Upon retirement, Levesque told glassBYTES.com that he was looking forward to a quiet life of fishing. “I live to fish. I have a sign that says I was born to fish and forced to work. I’m not planning anything else, we’ll just see what comes up.”

Levesque is survived by his wife of more than 20 years, Crystal.

GlassBYTES also regrets having to share the news of the sudden passing of Brenda Boehmer, wife of Dan Boehmer, president of Rolladeck Industries Inc. She passed away in her sleep on August 20.

At press time, funeral arrangements had not been announced for either of the deceased.
To read more about Frank Levesque, click here.