After five years as a mobile glass installer for a major auto glass retailer, Jaymie Percival says she was considered the company’s best installer in Texas.

“They knew it, but they didn’t treat me that way,” Percival, 53, said. She was also the company’s only female installer in Texas. Individuals in training were paid more than Percival, she says, and adds that the representatives at the company told her it was because they had families to support. 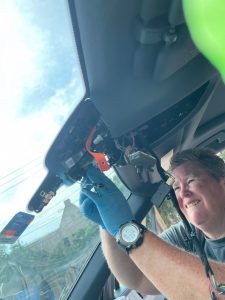 Percival focusing on an install. (Photo courtesy of Jaymie Percival)

One day she was called by the company to do an installation in a Subaru. When she arrived at the jobsite, the owner, a man who was in the military, asked her if she brought someone to help her. He even called her office and asked for a man to come out and do the job.

Percival installed the glass, and 30 days later she was called into her boss’s office about it. According to Percival, her manager said the customer had written a five-page letter to the company about why the job should be done again and this time by a man. Percival’s manager told her to redo the installation, and he would watch.

“I got a lot of that in the very beginning when I started installing mobile,” Percival said.

Like the time she was called to install door glass on an Audi. After the installation, the owner of the car told her: “I guess it’s true what they say. If you want something done right, you send a woman.” Percival says the Audi owner told her that four men had attempted to install the glass before her, and each had failed.

Percival began installing glass 30 years ago while in college at Texas Tech where she earned a degree in business management while she worked part-time in the major auto glass retailer’s warehouse.

After graduation, she returned to Dallas where her father lived, and worked full-time for the company in its Arlington office for two years as a distribution sales representative.

Then she worked in retail for the company as a customer service representative, but the office was shorthanded. “I wound up in the shop to the point I was installing glass,” Percival said.

When the company reorganized and closed shops, Percival was proficient enough to become a mobile glass installer. She was with that company for 15 years, the last five of which she also trained installers, and all of whom are still in the industry.

She then became an installer for Binswanger Glass in Duncanville, Texas for five years followed by a stint as a mobile installer for Glass Doctor for four years in the Fort Worth area.

While working for Glass Doctor, Percival was interviewed for what she was told would become a commercial for the auto glass company. She was told they definitely wanted to have her interview in the commercial “because you’re the only female we’ve come across.”

She was filmed training a woman to install glass for the commercial.

Six or seven months later, Percival received a call and was instructed to pack a bag and go to Waco, Texas, presumably to launch the commercial she had filmed. That was when she met the then-CEO of the company that owned Glass Doctor, the woman she had trained a few months before. Percival realized she was in an episode of “Undercover Boss.”

Percival said the CEO asked her what job she wanted. “And I looked her dead in her eyes, and said: ‘I want your job.’”

When the episode aired on CBS, most of Percival’s scenes were omitted because she had left Glass Doctor six months after filming. Glass Doctor did, however, as is customary at the end of each episode to reward the employee, give Percival’s son $10,000 toward a college education.

Percival worked as a subcontractor after Glass Doctor, then opened Superior Auto Glass, six years ago. The company serves the Fort Worth and Dallas areas of Texas and is a five–star company.

She has a simple reason for staying in the auto glass industry for 30 years. She got out once, but returned. 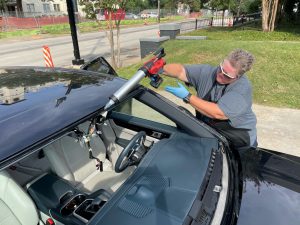 Everyone has a why. Freedom keeps Percival moving forward. (Photo courtesy of Jaymie Percival)

“For me, it’s the freedom. I’m not sitting in an office with someone staring over my shoulder,” Percival said.

She makes a better living now working for herself installing auto glass. She usually performs four jobs per day, five or six if time permits. She picks which jobs she wants and chooses which products she wants to use. “I probably do better quality work [self-employed],” Percival said.

Looking Back and Looking Forward

Thirty years is enough time to see some changes happen in the industry, and Percival has seen several. She said the quality of glass installed in vehicles has improved. “The glass I was putting in 20 years ago was absolutely crap.”

Additionally, the introduction of universal moulding “was a Godsend.” Before, installers could break the glass just trying to get the molding in.

Urethane has also changed. It used to be a runny substance. “I wore urethane home every single day [when she started in auto glass].”

“I’m looking forward to see what’s going to happen in the next five years,” she said. She expects certification of installers to become necessary. “I think sooner rather than later, as auto glass installers, we’ll have to be certified,” she said. And she thinks certification will improve the industry.