A focus on customer service, a team of quality employees and dedicated customers are ingredients in the recipe for success in the auto glass industry. 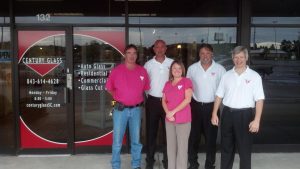 The early team at Century Glass

“Really, it’s having a great team and having a fantastic customer base,” says Randy Wright of Century Glass’s keys to success. “It’s a blessing. We’ve weathered some storms.”

Wright says, “it’s exciting” when he looks back at the last 30 years. “I had watched the evolution of Century Glass before I took them over. They were actually a customer of mine.”

Wright bought the company in 2004 when it had only one branch in downtown Columbia, S.C. He serves as president of two branches in Columbia and two in Charleston.

“I still enjoy coming to work every day. I enjoy seeing the team, celebrating the successes,” Wright says. He credits the company’s 30 years of success to his 68 employees and the company’s customers.

According to Wright, the employees’ dedication to customer service and their commitment to each other may go unnoticed by customers but is a key to its success.

“Our goal is to be the best customer service provider in our industry,” Wright says. Wright says it is fun working with the Century Glass team and watching members work their way up within the company. “It’s very rewarding.”

The company’s membership in the Auto Glass Safety Council (AGSC) brings Century Glass respect and partnership with the best in the industry when it comes to installations. “It’s important to be a part of the cutting edge.”

The storms Wright refers to are the Great Recession of 2008-2009 and the COVID-19 pandemic. “It was a challenging time,” Wright says of the economic downturn. “It was kind of scary as a young business owner when you have everything on the line.”

Yet Century Glass persevered and grew. The company offers auto glass, residential glass, including shower doors, in its retail department, as well as windows, tabletop glass and mirror walls in its city service.

All auto glass installers are certified as Master Technicians by the AGSC, Wright says. “We’re really excited about [our auto glass], and we’re doing calibrations.” 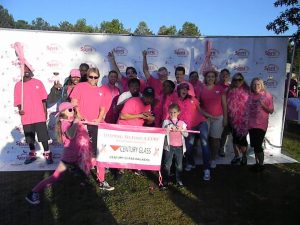 “We don’t shy away from much,” Wright says of the company’s glass options.

Century Glass is involved in the local communities in various ways. In Columbia, the company assists the Building Industry Association of South Carolina and in Charleston, the Home Builders Association. Causes such as Breast Cancer Awareness and the Pawmetto Lifeline, a local animal adoption company, are important to the glass company. Century Glass also volunteers for the Department of Aging by replacing glass for elderly residents.

“I think it’s nothing but up,” Wright says of the next 30 years for the company. He sees controlled but aggressive growth within the company by making smart decisions. Wright says the company can always “work to improve our [work] culture.”

However, he sees the company keeping it personal. “We still want to keep our small company feel.”

When it comes to the auto glass side, Wright says the industry is “constantly changing.”

The company has seen the changes in adhesives, the need for calibration, and how windshields are replaced. “We just got to keep up with changes in our industry, and that’s one of the benefits of being an AGSC member,” Wright says.