Koty Crook lives and works in Hopkins County, ground zero for the tornado that swept through Kentucky on December 10. “It was a normal day,” Crook, 27, says of that Friday, which was also payday. Crook is a technician for Avizion Auto Glass. The company provides auto glass installation from 20 shops throughout the state and is the designated glass company for Kentucky Farm Bureau Insurance. Crook works in the Western Kentucky region, the area hit hardest by the tornado. 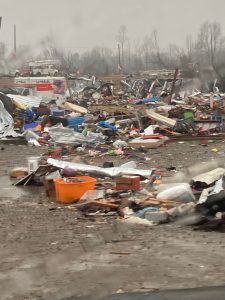 Koty Crook lives and works in Hopkins County, Ky., where a tornado swept through on December 10.

“It was 60-something degrees in Kentucky in December, so that wasn’t good,” Crook says of Dec. 10. He and others had heard for several days warnings of bad storms coming. “We kind of took it with a grain of salt.” Crook says the storm began in Jonesboro, Ark., as a mixture of a thunderstorm and a tornado, then traveled 273 miles to Hopkins County. “So the initial storm started over 200 miles away. It traveled 200 miles,” Crook says.

Just before the storm passed within half a mile of his home and damaged his roof, Crook had some friends over when they began to hear sirens and receive emergency alerts on their cell phones. Crook says he had never experienced a tornado or a storm like this one. The storm hit Dawson Springs, about 10 miles away. “That’s where all of our county’s deaths have come from,” Crook says of the death toll that was at 25 at press time. “It hit that town when nobody was expecting it.” Residents had gone to sleep unaware of the danger.

After the storm hit, Crook says that he and a friend went to the town of Barnsley, and began pulling people out of their homes staying there until 3 a.m. Saturday morning. Crook’s father pulled a baby alive out of a bathtub. “The only thing that saved [the baby and another child] was that they were in a bathtub,” Crook says. Crook and his friend also helped clear roads in the area for first responders to get in and out.

“It completely leveled the town of Mayfield,” Crook says. 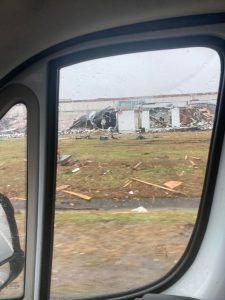 Koty Crook, an auto glass technician for Avizion Auto Glass, works to install auto glass in vehicles after the destruction of a December 10 tornado in Kentucky.

The President visited last week, and Crook saw his motorcade, but since the storm, Crook has been busy installing auto glass. Right now is usually a slow season for Avizion Auto Glass. Since the storm and tornado, Crook has five or six jobs per day, and expects to have plenty of work into the New Year. “A lot of door glass, a lot of back glass,” Crook says of replacements.

Crook says a preacher lost his home in the storm, and he and his wife are living out of their truck. Crook replaced the windshield in the truck. “I got those people a windshield. They started crying,” Crook says. Customers often show appreciation for auto glass work, Crook says, but he has not seen anyone cry before. Crook says he is working on auto glass as he receives jobs from customer service representatives. “We don’t prioritize. We know people need help right now.”

“In order to rebuild, in order to feel somewhat normal, you got to have a vehicle,” Crook says of recovering from the storm.