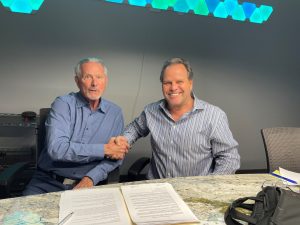 Auto Glass America was recently involved in a two-year court battle with Allstate which was dismissed by a Florida judge in October 2021. The auto insurance company alleged that Allstate’s insured customers were pressured to hire AGA for windshield repairs and replacements. Conflict centered around payments for the windshield replacements.

NuVision of Phoenix was founded in 2018 by Kieffer and two business partners. Kieffer considers Auto Glass America owner Charles Isaly his mentor and friend. “I think it was a good time for Chuck to exit the business,” Kieffer says of the timing of the purchase of AGA. Isaly, 75, will remain in an advisor role, and AGA will retain its name and 16 employees in Arizona and Florida.

AGA is a mostly mobile auto glass provider in Phoenix and Orlando. Kieffer says that NuVision was all mobile also until recently opening a brick-and-mortar shop. “We’re going to run the business just like Chuck has built it.” Kieffer says he told AGA employees about his 60-day plan: change as little as possible. More marketing and advertising of AGA is possible later.

Kieffer says he and Isaly met three years ago and regularly have lunch together once or twice a month. With NuVision’s purchase of AGA, they will get to work together. “Just a very solid business [man] and personally,” Kieffer says of Isaly. He appreciates Isaly’s solicited and unsolicited advice. “But I always listen to what he says because he’s a very successful individual.” Kieffer says he hopes to also be able to mentor to others when he gets older.

In regards to the court settlement in Allstate vs. Auto Glass America, Kieffer says “I think [Isaly] did very well.”

“Chuck has spent the last 10 years building an outstanding auto glass business, and NuVision is fortunate to have been chosen as the company to carry on the great name and reputation of Auto Glass America,” Kieffer says in a Facebook post announcing the purchase.