Can I Charge for Mileage? Tesla Replacement Requires Long Commute

On February 20, John Bonner began a journey in his 2021 Tesla Model 3 from Billings, Mont., to Salt Lake City. He had an important appointment the next day.

The trip was not a sightseeing tour, but with a mission: getting his Tesla’s back glass replaced. 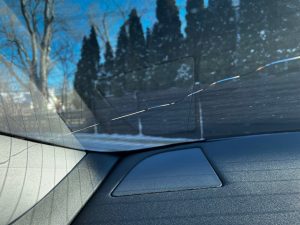 The back glass of John Bonner’s 2021 Tesla Model 3 suffered a stress crack.

Bonner opened Glass Specialists of Billings, Mont. in 2003. He is president of the company, and also owns Auto Glass Direct. As an auto glass shop owner, Bonner says customers have been calling for years asking for Tesla glass replacement services. “As a glass shop, you can’t even get [the glass],” he says. Supplying the glass services has been on his mind. His shop can replace windshields, and in the next year hopes to also provide replacement services for back glass. However, per Tesla requirements, the work his shop does cannot be work done under warranty.

Last month, he needed the back glass in his own Tesla replaced. “The back glass broke for no reason. It was a stress crack,” Bonner says. Covered under warranty, he went online to make an appointment to have the glass replaced at the nearest service center — in Salt Lake City. He made the appointment two months in advance, then he drove 550 miles one way.

A technician replaced the glass for him at the service center. “And they did a good job. I obviously was going to be picky about it,” Bonner says.

Bonner joined the auto glass industry in 1999 after dropping out of high school. His parents agreed to pay if he attended trade school. He took a painting class to learn to paint cars. Then he heard someone speak at an event about auto glass. One of the guys he met at the event soon got work at an auto glass shop, and later brought Bonner on. “That kind of changed the path I went on,” he says.

He bought his Tesla in 2020. “Anybody who has a Tesla — they want to talk about it for hours, because they love it,” Bonner says. Teslas can give a light show for owners, allow participants to sing karaoke in the car and recharge overnight. Bonner says he can recharge his Tesla at home for $4.50. “They’re a fun car.” Anything an iPhone can do, Bonner says the heads-up display in the Tesla can do.

The only drawback? Driving a long distance to have auto glass replaced. “It just so happens my back glass broke,” he says. But, with the difficulty lately in obtaining Tesla auto glass, Bonner was fortunate to find the back glass at a center. He took four days off work to drive to Salt Lake City, have the glass replaced and drive back. “But, I think the experience was worth it.” Bonner wrote a blog about his journey for Glass Specialists’ website. 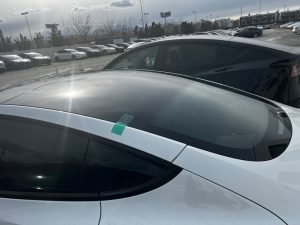 John Bonner drove 550 miles to get the back glass of his 2021 Tesla Model 3 replaced.

Bonner left early for his trip to Salt Lake City to get ahead of a winter storm and avoid having to reschedule his appointment. On his return drive to Billings, the temperature dropped to -20 degrees, the roads were slippery and it was dark. His Tesla’s heater could not keep up and his windows fogged up. Then a message came on his screen that the Tesla’s heater required service. The heater was no longer heating the car.

In his blog, Bonner wrote that the windshield froze almost instantly inside the car because of condensation and he lost visibility. A railing was on his right and oncoming traffic on his left, but he managed to keep the car in his lane and pulled off the road when he could. After calming down, Bonner realized that if he turned on the air conditioner and cracked open windows, the windshield would clear of condensation. “I now had visibility and was on my way to Bozeman in a freezer on wheels,” he wrote in his blog. He went to a motel. Bonner later searched the Internet and learned that his model Tesla commonly has heater issues if the temperature gets below -15 degrees.