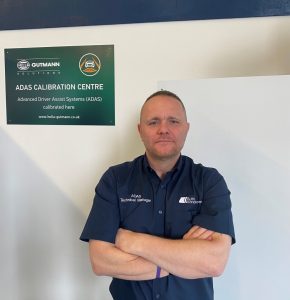 Following a 100% increase in the volume of ADAS calibrations since 2019, Auto Windscreens continues to commit to the future, introducing a dedicated role and naming Darren Boden as its ADAS technical manager.

The company also announced its investment in the latest tools from Hella Guttman, allowing it to meet increasing demand and offer ADAS calibrations to customers at each of its 70 sites across the United Kingdom.

Boden has worked for Auto Windscreens for nearly 30 years, starting as a technician and then joining the training team.

“Darren will bring vast knowledge and experience to his position as ADAS technical manager,” says operations director Sean Draycott. “I’m confident he will excel and play a key role in the growth and success of Auto Windscreens as we expand our ADAS solution.”

“ADAS features are now more widely available in popular models, but many customers are unaware they require recalibration following a windscreen replacement. We want to make things as easy as possible for customers but also educate them on the importance of keeping these systems working properly,” says Boden.

This entry was posted in glassBYTEs Headlines and tagged Auto Windscreens. Bookmark the permalink.