The long-lead times Tesla is experiencing with respect to securing glass for its automobiles is not the only challenge currently facing the automaker. California’s Department of Motor Vehicles has taken issue with Tesla’s advertisement of ADAS features, including usage of and descriptions for “autopilot” and “full self-driving capability.” 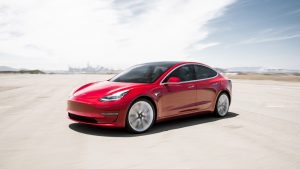 Tesla recently received permission from a German appeals court to continue advertising autopilot and full self-driving features in Germany. The decision reversed a prior ruling stopping the advertisement of those features in the country. A Tesla 3 is pictured. Photo courtesy of Tesla.

On July 28, the DMV filed the complaint with the Office of Administrative Hearings, asking that repercussions for the automaker potentially include suspension or revocation of its California dealer license.

The complaint alleges that Tesla disseminated “untrue” or “misleading” statements not based on facts with respect to advertising vehicles it said were equipped with ADAS features. The complaint lists five dates spanning from May 2021 to July 2022 on which it says Tesla advertised the features in written marketing materials and on its website.

According to the complaint, advertisements included language such as “autopilot,” and “full self-driving capability.” Also advertised was the phrase, “The system is designed to be able to conduct short and long-distance trips with no action required by the person in the driver’s seat.”

The complaint also says that Tesla claimed vehicles would look at the owner’s calendar and take them to the desired destination, all without verbal instruction. Upon arrival, Tesla reportedly advertised that the vehicle can be prompted to search for a parking space before ultimately parking itself.

“Instead of simply identifying product or brand names, these ‘autopilot’ and ‘full self-driving capability’ labels and descriptions represent that vehicles equipped with the ADAS features will operate as an autonomous vehicle, but vehicles equipped with those ADAS features could not at the time of those advertisements, and cannot now, operate as autonomous vehicles,” the complaint reads.

The complaint then refers to the above advertisements as “deceptive” while calling attention to disclaimers reportedly published by Tesla. One such disclaimer cited in the complaint reads that “currently enabled features require active driver supervision and do not make the vehicle autonomous.”

“However, the disclaimer contradicts the original untrue or misleading labels and claims, which is misleading, and does not cure the violation,” the DMV argues in the complaint.

The complaint asks that the DMV suspend or revoke Tesla’s California dealer license. Additional modes of requested relief include restitution to persons or institutions having suffered financial harm, and “any other and further action as it may deem just and proper under the circumstances.”

On a related note, Tesla recently received permission from a German appeals court to continue advertising autopilot and full self-driving features in Germany. The decision reversed a prior ruling stopping the advertisement of those features in the country.

This entry was posted in glassBYTEs Original Story and tagged ADAS, California, Department of Motor Vehicles, Tesla. Bookmark the permalink.