Vitro Automotive Glass will hold an open house for its warehouse facility and distribution center in Franklin Park, Illinois, its second such location in the United States, on Friday, Sept. 23. Jim Ricci, business development manager at Vitro, says the new location may carry as many as 50,000 to 60,000 parts when at full capacity. 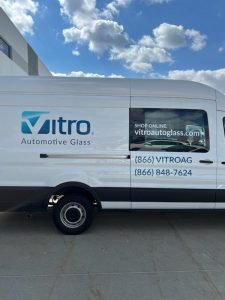 The location will launch with 10 delivery vans but Vitro will bolster the fleet as needed.

Vitro Automotive Glass manufactures a full range of automotive glass for the OEM market. Ricci says the new facility in Illinois is central to the Chicago metro area, allowing the company to better serve customers all throughout the Midwest and Eastern regions of the United States.

“This is Vitro’s second distribution center in the U.S.; the first one is in Irving, Texas,” Ricci says. “We plan to open many more throughout the U.S., but for now, this is number two. We’re moving into a 50,000-square-foot facility here.”

The Illinois location will launch with 10 delivery vans but Vitro will bolster the fleet as needed.

Ricci also says that while many customers utilize the company’s “state-of-the-art” website to make orders, there are still those who prefer to perform such business in person.

“We’re having an open house for our customers to show them the facility and to get them acquainted with where we’re at,” Ricci says. “We will have a number of customers that will pick up product from us versus us delivering. We, of course, deliver, but a lot of customers will pick up the product from us. So the open house is for them to get acquainted with us and with some of our people that are working there.”

The open house is scheduled for 5:30 p.m. Friday, Sept. 23 at Crane World Logistics, 10601 Seymour Ave., Ste. 300. Ricci says Vitro will erect temporary signage on the building for the open house, and that the permanent sign will have a similar appearance once placed.

“I think they will be impressed,” he says. “It’s a very clean building and it’s a relatively new building. We’re very customer-oriented; we want them to make us their supplier of choice and we want to earn their business. They have other choices but our goal is to be better than the rest. There are plenty of competitors out there so we want to put the Vitro name forward.”

This entry was posted in glassBYTEs Headlines and tagged Illinois, Vitro Automotive Glass. Bookmark the permalink.