The spring meetings of the Auto Glass Safety Council (AGSC) were held last week in Tampa, Fla. The meetings were the first in which the members of the former National Windshield Repair Association (NWRA) were incorporated into the AGSC.

Newly-elected to the expanded board of directors were Linda Rollinson, of Superior Auto Glass in Tampa and Jeff Reddell, of Pace Glass in Texarkana, Texas.

“We are so pleased to have both repair and replacement in one tent and focused on safety,” said Troy Mason of Technaglass. Mason had sat on both boards of directors. 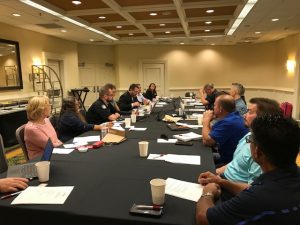 The three days of meetings began with a discussion around priorities for the windshield repair community. Integration of the NWRA standards into AGSC was discussed. It was followed by an intensive six hour strategic planning session that developed priorities for AGSC for the next 2-5 years.

“The level of passion for AGSC, as well as the great ideas brought to this session will mean a very active and results-oriented future,” said Jean Pero, AGSC vice president.

The board also voted to create two new certification programs: one for customer service representatives and the other for calibration providers.

The AGSC Credentialing and Marketing committees also met and a new committee, called the Member Benefits Committee, was formed and will be chaired by Aric Haarala of Glass Mechanix Solutions. Haarala is charged with taking a fresh look at what members want and need. Toward that end, a member needs assessment study will be conducted during the next few months.

The Automotive Glass Replacement Safety Standards (AGRSS) Committee also met and spent most of its time discussing the integration of calibration procedures for glass shops into the Standard.

“It’s a work in progress,” said Standards Committee Chair Bob Beranek of Auto Glass University. “Some of our members perform their own calibrations, others send them out; we want the Standard to account for each method.”

The spring meeting concluded with an ADAS Committee meeting, which continued the discussion as well as talking about other ways to serve members and the new ADAS certification program that will be coming.

The committees will next meet during Auto Glass Week, starting on September 3rd in Indianapolis.